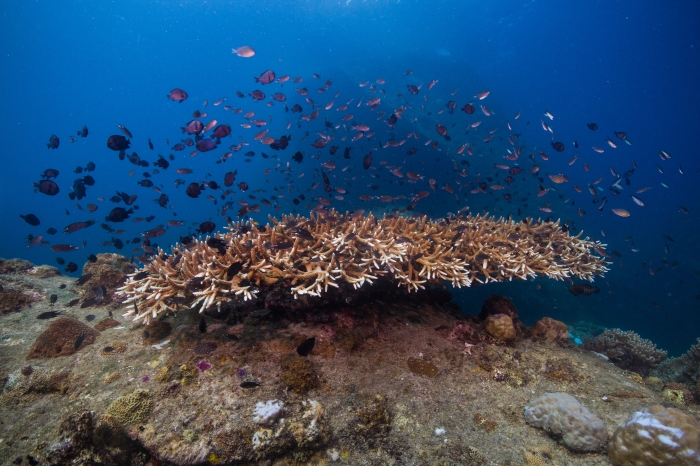 If we do not allow for the survival of organisms that defend coral from algae, then in twenty years there will be no more reefs in the Caribbean. This is the main message contained in the report “Status and Trends of Caribbean Coral Reefs: 1970-2012”, released on July 2, 2014, following three years of joint work between the Global Coral Reef Monitoring Network (GCRMN), the International Union for the Conservation of Nature (IUCN), the United Nations Environment Programme (UNEP), and a large number of scientists around the world.

In 1972, Sylvia Earle, the renowned marine biologist, said the reefs of the Caribbean “were virtually free of algae.” Today the opposite is true: the alga is overgrown and invading the corals in the Caribbean. The report notes that in the last fifty years, the presence of live coral in the Caribbean has fallen by 50%, while algae has increased dramatically. The Caribbean reefs help promote tourism and fisheries, which generate over 3 billion dollars a year, and since they are one of the ocean’s major ecosystems we must stop this tragedy.

These days, you hear that coral reefs have been sentenced to death by climate change but the report notes that so far the loss of parrotfish and other herbivorous (algae eaters) have aided more in the destruction of reefs than climate change has. No one denies that climate change poses a huge risk for the future of the reefs by way of coral bleaching and ocean acidification, but it is also true that reefs that have been protected from overfishing and pollution better resist excessive coastal pressures like the aforementioned. “Even if we could make climate change disappear tomorrow, the reefs would continue to degrade,” said Jeremy Jackson, lead author of the report. “What we have to do is attack the lack of herbivores so that reefs have a chance to survive the climate changes ahead.”

“The destruction of the corals began long before climate change began to affect the reefs,” said Terry Hughes, author of a study published in 1994 which states the problems that come with the extinction of parrotfish. The new report finds that one of the attributes that the best reefs in the Caribbean have in common is a vigorous population of parrotfish, which help keep algae under control. They are tough and resilient reefs simply because they have known care and respect. Indeed, where regulations are met, it has managed to double or even triple the 14% of live coral cover that is normally seen in the Caribbean. Testimony of this are sites like Flower Garden Banks, with 55% coverage of live coral, the Bermuda islands with 35%, and Bonaire too with 35%. In all those places, fishing for parrotfish is prohibited.

The reefs of Flower Garden Banks, north of the Gulf of Mexico, have the status of National Marine Sanctuary, where it is forbidden to place nets and take parrotfish. In Bermuda, nets and spearfishing were banned many years ago. And Bonaire, whose economy relies entirely on tourism and the health of the reef, also restricted fishing quite some time ago. As time passed, the laws became more permissive and reefs begin to decline; so the people of Bonaire immediately restored the rules.

But where parrotfish are not protected, reefs deteriorate beyond repair. These reefs “failed” in places where human activity has grown unchecked and the reefs have been exposed not only to overfishing, but also, because of excessive recreational use, to a destructive urbanization and pollution. Among the most damaged parts of the Caribbean are Jamaica, the Florida Keys from Miami to Key West, and the Virgin Islands.

“Often, while thinking about the big problems that climate change will bring in the future, we forget the problems we can solve here and now,” said Carl Gustaf Lundin, Director of the Marine Program of International Union for the Conservation of Nature, and Manager of the Global Coral Reef Monitoring Network. “We have to go from reef to reef, island to island, region by region to see what can be done locally, without forgetting that the great enemy is the unlimited use of fossil fuels.”

There is hope of saving the reefs in the Caribbean, but we have to understand that we are destroying the parrotfish population when the very survival of the reefs depends on them, and if we destroy the reefs, we also do away with all the economic and ecological benefits they provide us. The report strongly argues in favor of prohibiting fish traps in the Caribbean, spearfishing and any fishing that results in prejudice to parrotfish. To achieve this goal, “we support the formation of a network of Caribbean nations to work together to find a unified solution to the crisis that is destroying the reefs of the Caribbean,” said Jerker Tamelander, Director of the Coral Reef Unit of the United Nations Environment Programme.

Some countries are already taking steps in the right direction. Barbuda seeks to prohibit any form of capture of parrot fish and sea urchins, and to grant the status of marine reserves to a third of its coastal waters. “This is the kind of operation that should be applied throughout the region if we want to improve the strength and resilience of reefs in the Caribbean,” said Ayana Johnson of the Blue Halo Initiative at the Waitt Institute, which is working with the local communities and the government of Barbuda. Larkin Webber, one of the oldest fishermen in the area states: “I worry about the catching of parrotfish because they are the ones who clean the reef, and now it seems that there are people who specialize in removing them. This cannot be. We must protect them. ”

It will be difficult to save the Caribbean reefs, but as Jimmy Cliff, the “father” of modern reggae said, “You can get it if you really want, but you must try, try and try. You’ll succeed at last.” Can be translated simply as “will is power.”